Due to concerns surrounding the outbreak of COVID-19,
all public presentations have been cancelled.

In modern-day New York, Sarah is moving into an apartment with her female partner Alix, but she becomes increasingly distracted when sorting through a box left to her by her Aunt Betty. Within Betty’s box is research into the ballads passed down from their ancestors—specifically the stories of two women on the verge of motherhood who carried these songs from Scotland to Ireland and onto America. These three remarkable women at different times in history find connection and guidance through the traditional songs passed down their family tree. For Sarah, the rediscovery of these songs and the stories embedded within them brings to the surface her own desire to have a family. As the ghosts of Sarah’s ancestors take over the apartment, she becomes obsessed with Betty’s research and faces a life-changing decision that only she can make. Can Sarah maintain her identity as an independent queer woman in NYC whilst also honoring the traditions of her childhood?

A Mother’s Song was originally commissioned and developed as a part of AMTP’s partnership with the Royal Conservatoire of Scotland and was first performed at the Edinburgh Festival Fringe in summer 2018. Check out our Facebook page for photos from the 2018 production!

Find out more about the 2018 production 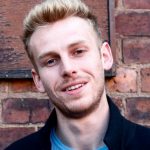 FINN ANDERSON (Book, Music & Lyrics) is an award-winning Scottish musical theatre writer, composer and singer-songwriter working throughout the UK and internationally. He studied Music at the University of Highlands and Islands before completing an MA in Musical Theatre Writing at Goldsmiths, University of London.

Finn has also composed music for some of the UK’s leading theatre, dance and circus artists and companies. His debut album as singer-songwriter ‘Until The Light’ was released in June 2019. 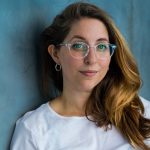 TANIA AZEVEDO is a theatre maker who graduated from Mountview Academy of Theatre Arts and the King’s Head Theatre. She is the co-founder of award-winning Play Pen Productions and Associate Director for Giants Theatre Company.

She received an Off-West-End Award nomination for Best Director for the London run and international tour of the new musical Paper Hearts.